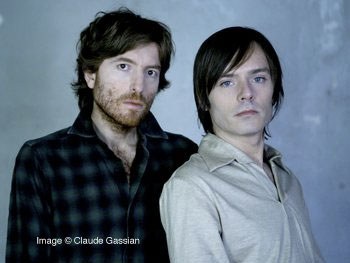 One day around noon the phone rang. A voice from the national Danish Broadcasting service – Danmarks Radio – asked if I had some available time in the studio that same afternoon. Not for music recording, but to have some special guests interviewed, who would like to do the interview in front of a modular synthesizer. At that time – before the hipster modular hype – I was one of the only owners of such an instrument, so they called me. I rearranged my afternoon to accommodate for that, without knowing who the guests were.

When a limo and some vans rolled up in front of the studio, I was naturally curious to see who it was. And out of the limo came 2 straight, pale and skinny guys from Paris, together known as “Air”. They already had some major hits with their retro-infused style of electronica. I liked Air already, and was following their work, so it was a pleasure to have them show up.

The interview started out a bit chaotic, since Air hated the camera angle and setup made by DR, and insisted on a new shooting angle, featuring the modular synthesizer more. They were seemingly more keen on discussing synths etc., than making the interview, so after the promotional duties were over, we had a really good talk. They were very kindly inviting me to their show in Vega, Copenhagen the same night, and after the show we had some beers and additional talks in the backstage area. Good and talented guys with a real passion for their music!