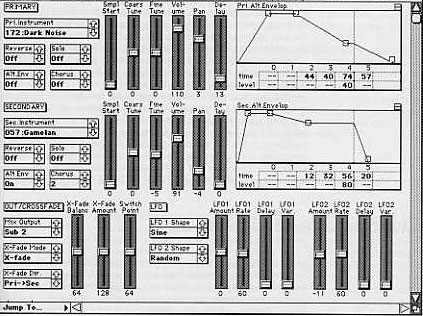 I have always had an interest for randomness when creating synth sounds. Some of the very early DX-7 editors for the Commodore-64 computer featured a randomizing feature that produced completely unpredictable results. Most of it was useless, but every once in a while you would come up with a sound that you had not heard before, or did not think the machine was able to produce.

The problem with randomisation of patches is, that you don’t get results that necessarily fit into the production you’re working on. So you end up saving it, but never use it.

In order to get the maximum out random patch generation it is better to actually build your music around the patches, instead of the opposite.

Only selected synths feature a random patch function. Incidentally those are synths I tend to use quite often – exactly because of this. Below are a few synths with potent randomising function:

Various manufacturers have tried their take on intelligent randomising functions, that can derive related sounds from the currently active sound. The “Sound Galaxy” features in some of the Arturia synths can produce interesting results, and so can Spectrasonics Omnisphere and several other.

But I always wish for more synths with this feature, so I decided to try to construct a Logic Pro X environment that would allow the randomising of any soft synth (plug-in) and many hardware synths, too. Even if they do not come with this feature. So I now have a fully working environment for this purpose. This actually has led me to a new way of programming synths. Read more….