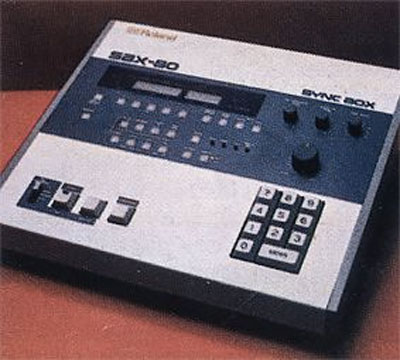 It may seem odd today, but the Roland SBX-80 sync box was a real relief for syncing up MIDI sequencers to analog tape recorders. Released in the mid 80s, it was the perfect companion for e.g Rolands own MSQ-700 and MSQ-100 MIDI sequencers, but could be used with anything that slaves to MIDI sync.

After recording SMPTE code to a tape track (“stripping the tape”), the SBX-80 reads the code from tape and generates a nice, solid MIDI clock, to drive compatible machines. And with the inclusion of MIDI Song Position Pointer (SPP) messages, the tape can be started anywhere, and the SBX will follow at the next bar.

For music that drifts in tempo (e.g. live recordings), the SBX-80 can be programmed to change tempo on every beat, and thus follow precisely. Takes a while to program, but the data can be saved and re-used.

I have used the SBX on numerous albums, and was always impressed with the reliability and speed you could achieve.

The SBX-80 lost relevance as people moved away from tape recorders, and into their DAW. But there is nothing stopping you from recording a SMPTE code to an audio track in your DAW, and drive the SBX-80 and your older MIDI gear, just as you would from a tape based recorder.