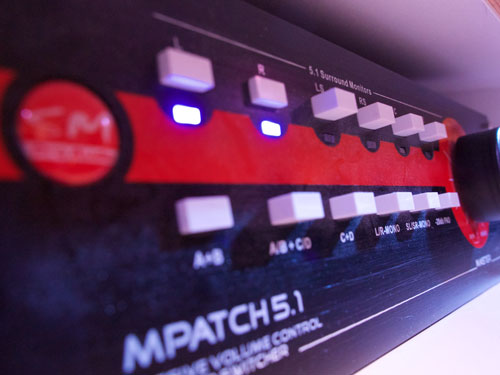 The active monitor switchers has circuitry that makes it comfortable and flexible to switch settings. However, this may come at an expense to the sound quality, since the signal passes through additional circuits before hitting your ears. This may lead to misjudgments about the sound or a mix if the electronics are not very high quality, or not properly adjusted.

The passive version has no extra circuitry, and can either by relayed or direct switching of in- and outputs. This obviously does not affect the source sound, since no electronics are added. The connections are hard-wired, and only switched in or out, The relayed version allows for more comfortable control, since the relay themselves can be digitally controlled, so settings may be stored and recalled. But it also adds significantly to the cost. So the most cost-effective clean signal switcher is the passive, directly switched one. This has the disadvantage of being prone to mechanical and/or electrical noises during switching, but otherwise does the job.

Fluxic Studio has got the last type – the SM Audio M-Patch 5.1. Featuring directly switched in/outputs, and a passive, stepped level control. The unit works and performs as expected, but with occasional noises during switching and level control, The system comes to full use during the Fluxic Live Studio Concerts, featuring a full 5.1 setup.