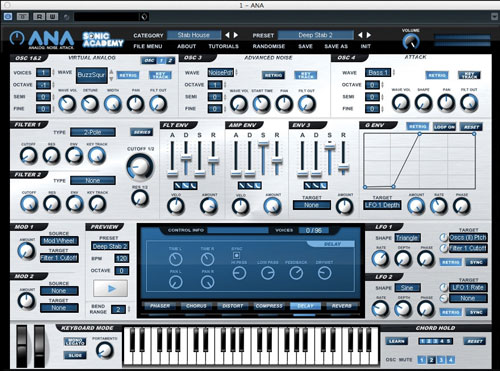 ANA is definitely a well-equppped subtractive synth, capable of producing all standard virtual analog flavours. Plenty of everything, and a large modulation matrix caters for some very complex possibilities.

I acquired it mostly because of the randomizing feature, which is very much in line with my current generative music experiments. And ANA does deliver some wildly unpredictable sounds and soundscapes when clicking the Random button. You can lift some elements from the randomizing function, and thus narrow down your sound creation to making variations of what you have.

After experimenting with my own randomizing editor system, I feel that ANA is not always generating random sounds the way I want them – which is a bit contradictory, really. But with certain other synths (e.g. Absynth) I feel I get more useful sounds from this process. And with my own randomising system, I can get very specific as to what is being randomized and thus be very targeted.

I will upload some samples of sounds made with the ANA randomizing feature.