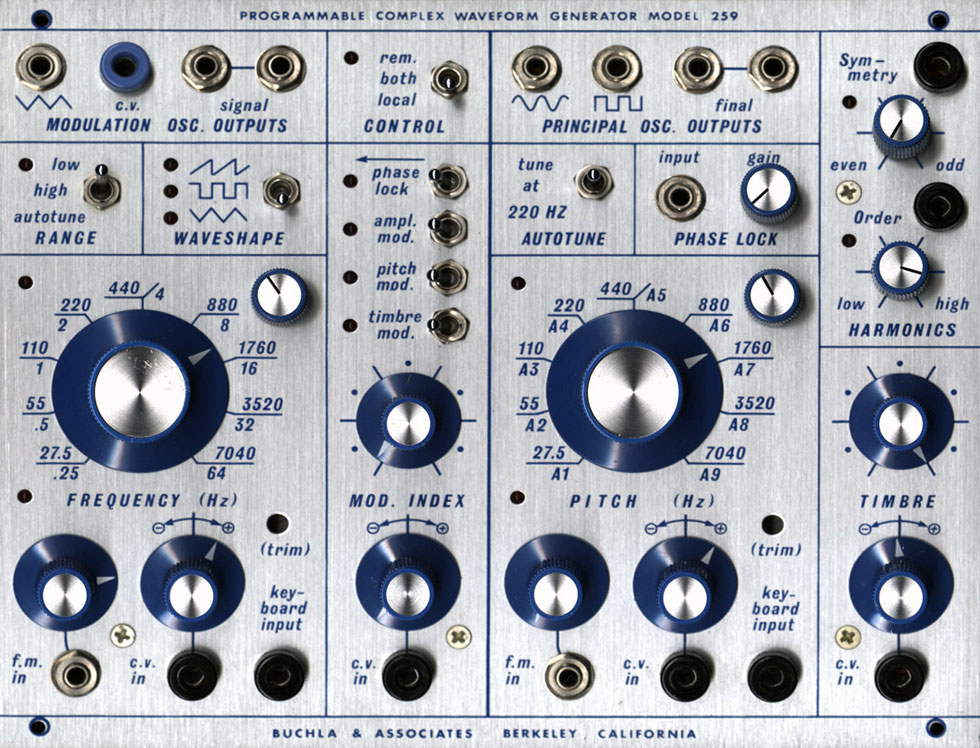 A key component of electronic music systems is the electronic oscillator or waveform generator, capable of producing everything from basic synth waveforms to complex, evolving electronic waveforms within the full audible (and inaudible) spectrum. Sound generators come in a variety of shapes, from very basic to highly complex.

Most sound generators will have manual basic pitch adjustment, with coarse and fine control. Often an octave switch to quickly swipe from Low to High.

Common to the electronic oscillator models are also a waveform selector, and waveshaping control, such as PWM (Pulse Width Modulation), or index of the wavetable. The waveform position/index point is a typical modulation destination for modulator sources such as Envelope Generators, LFO, Velocity, Keyboard etc..

And one or more pitch modulation inputs are always available with some form of intensity control, as well as control for the amount of keyboard tracking. Hard wired in fixed architecture synths, and available as a patch point in modulars. Input or adjustment for Keyboard control is necessary for traditional chromatic playback of the pitch.

“Sync” allows for waveform synchronisation with another sound source, and enables a range of timbral variations that the sound generator itself is not capable of.

VCO: Voltage Controlled Oscillators. Usually only able to create a few, overtone rich waveforms that may or may not be modified by a subsequent filter. Prominently featured in the e.g. Moogs, Arps and Rolands, and other East-Coast inspired modular systems.

Complex VCO: A dual type VCO, where one part of the VCO can do linear FM on the other part, and thereby create more complex timbres. Prominently featured e.g. in Buchla and other west coast inspired devices, as well as EuroRack modulars.

VCF: Voltage Controlled Filter. Any VCF with self-oscillating resonance capabilities can be used as a sound source. The resonance generates a sine wave, useful for many purposes: Sub-Oscillator, Percussion elements and special effects.

LPG: Low Pass Gate. A special vactrol-based VCA/VCF combo that can be set to self-resonance, and triggered to make percussive bongo-like sounds – made famous by Buchla systems (and often called “The Buchla Bongo”).

Resonators: A filter bank with several resonant filters that can be independently tuned, and used for chords, drones, and vocoding duties.

Wavetable Oscillator: An oscillator with stored tables of a string of complex single cycle waveforms. Prominently featured in PPG, Prophet VS and Waldorf hardware synths. And brought to new life by a new range of software synths like NI’s Massive.

Sampler: A memory based device, capable of recording, storing and playing back a long string of complex waveforms, that allows any sound to be used as sound source.

Rompler: A memory based device, that can read and play pre-recorded samples from EPROM memory chips.