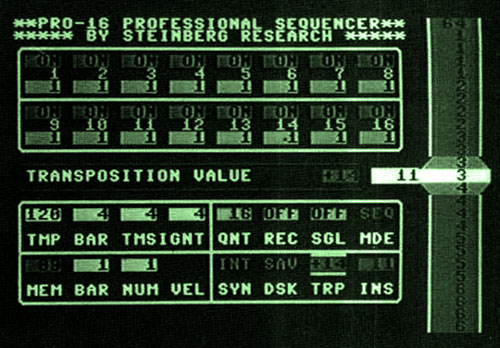 In 1983 a new technology swept across the musical landscape, and in very short time sent the CV/Gate based synthesizer gear to the corner. A common standard for exchange of musical data between electronic instruments, first agreed upon between Roland, Sequential and Yamaha. This new standard was called MIDI (Musical Instrument Digital Interface), and enabled two-way digital communication between instruments with a single 5-pin DIN cable.

A German company – Steinberg – was one of the first upstarts to see the potential in coupling musical instruments with a PC. They released the “Pro-16” MIDI Sequencer software for the Commodore-64 computer as one of their first products. By today’s standard a very primitive product, but in those days it was a giant leap towards the ever popular DAW (Digital Audio Workstation) of current times.

By attaching a small cartridge to your computer, you could run the software and get previously unavailable control over your gear from your relatively inexpensive computer. Of course you also needed a MIDI interface and a MIDI compatible musical instrument.

Hitting the limitations of MIDI

Originally MIDI was primarily designed to allow instruments to talk to each other, for stacking and sequencing instruments. The Pro-16 was able to record and play back 16 channels of MIDI data, across a single MIDI wire. By assigning different MIDI isntruments to different channels, you could create a multi-timbral setup. But the limitations of the serial MIDI interface was quickly exposed, when you started adding instruments. All instruments were fighting to hit the same spots, which is virtually impossible in a single MIDI wire. So it was problematic to create complex and predictable groove this way, since the groove elements shifted position with more stuff added, fighting for the same positions.

The start of something bigger

So the Pro-16, although quite a revolutionary product, was actually quite short lived, and by the launch of the musically successful Atari ST computers, it was replaced by the Steinberg Pro-24 sequencer for Atari, which used the better processor in the Atari to introduce a more detailed graphic display, and better resolution.