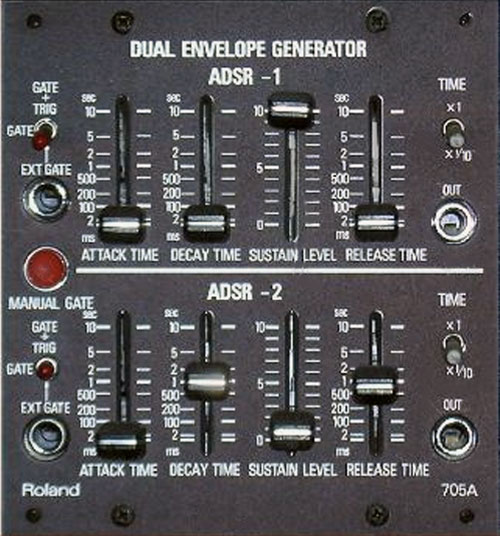 Child of many names…

They may have different feature sets, but the main purpose for all of them is to generate a voltage contour, going from zero to a number of values and back to zero again.

Common to all envelope generators (EGs) are that they need a Trigger or Gate impulse to initiate their cycle. This will typically come from the keyboard. A Trigger impulse fires the cycle once. A Gate impulse holds the voltage at the Sustain level as long as the gate is present. When the gate is turned off, the voltage returns to zero in the Release time. 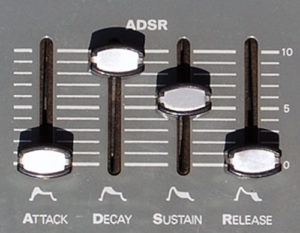 The most common type is probably the ADSR – Attack, Decay, Sustain, Release. If you have faders controlling the 4 parameters, you almost get a graphic representation of the envelope curve.

Attack: Voltage rises from zero to the peak in the set attack time.

Decay: From the peak it decays to the sustain level in the set decay time.

Sustain: The sustain level is kept as long as a key is pressed (as long as the Gate is on)

Release: The voltage falls back to zero in the set Release time.

The ADS type envelope was developed for the MiniMoog to keep the number of controls down to a minimum while maintaining flexibility.

This configuration even enables a special style of playing, which is typically associated with the MiniMoog – and clones.

The EMS way of making an envelope generator is quite different from the others.

This special variety is the Yamaha CS-80 way of enveloping. It can produce more variations than the standard ADSR, but is more difficult to grasp. The Initial level (IL) works similar to a hard attack when raised. The Attack Level sets the level the voltage settles on after the Attack phase.