The mix is in the Haus

German software company Jellinghaus had mainly been writing patch editors for the Commodore-64. But in 1987 they launched their first product for Atari ST – The C-Mix Automation System. Not only did it include the software to run on the Atari, but also a hardware part to strap on almost any desk.

The hardware is a special panel of MIDI controllable VCAs that is hardwired into the mixer signal path, and physically mounted below the mixer. The VCAs are controlled directly by the mixer faders. The faders generate MIDI commands when moved. The program allows you to record and playback MIDI information generated by the faders to control the VCAs. The system works with all mixers, if you are willing to break the signal path and insert it permanently. You can write both fader movements and mutes. And you can create groups of faders, even if your desk does not

In its basic format, C-Mix gives automated control and simulates a 16 channel mixing desk, with the screen display showing fader levels as the music progresses. The faders on the desk are of course not moved.

The hardware comes in banks of 16 VCA’s in a metal casing. Channel count is expandable up to 64 channels in banks of 16. The software allows you to make subgroups and mute/unmute channels during a mix. The generated mix data can be stored to Floppy Disc in the host computer (Atari 1040 ST). With the proper external sync box, the software can be synchronised to SMPTE code from tape via MIDI Song Position Pointer, received from the built in MIDI input on the Atari. Thus you can start the tape anywhere, and the mix will follow. 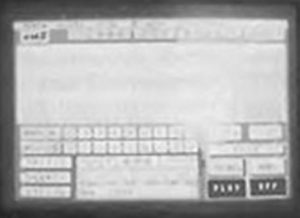 Using the C-Mix system was a mixed blessing, since it was not without bugs. In fact I found it too unreliable to be really dependable for critical mixes. A splendid concept that did add some extra creative possibilities to my Amek Angela analog mixing desk. But too often you would wonder why something was not playing at all, or playing with a wrong level. And waste a great deal of time troubleshooting and fixing errors.