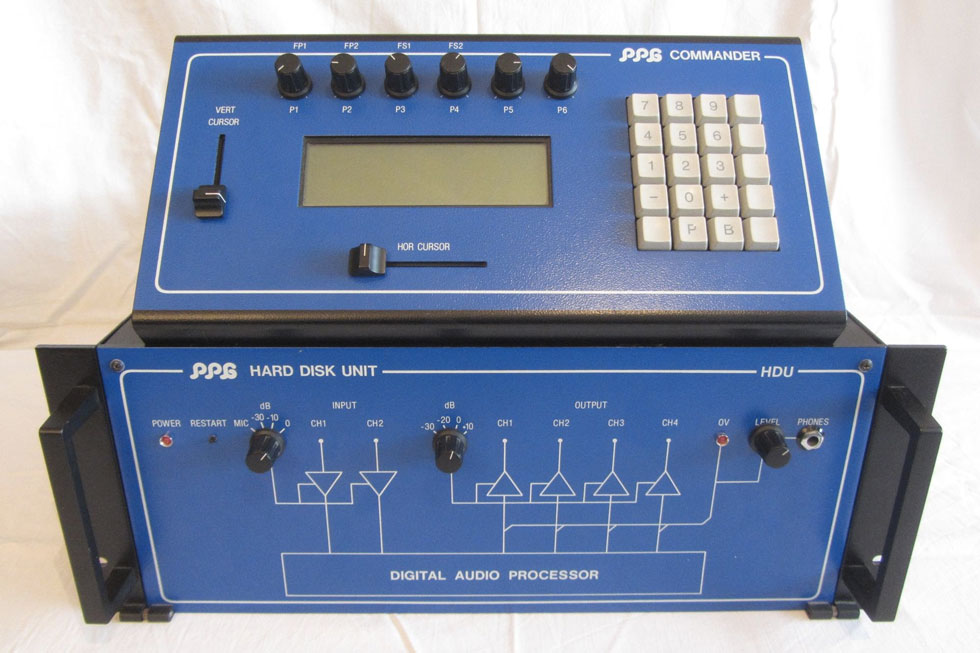 The PPG HDU was one of the very first Hard DIsk Recorders on the market. Launched in late 1986, the device promised to be a viable solution for editing of digital audio.

I acquired the device early 1987 (serial number #0068) to use it on the many extended 12″ remixes I was doing at the time. The machine was meant to be able to record and edit digital audio in an easy way. A big problem was that the software was never fully developed, so the machine could not deliver what it promised. Nonetheless I used it for creating the remixes. Instead of editing together parts on the unit itself in the digital domain, or triggering it via MIDI (something it could not do precisely and repeatable), I used the device to manually fly in sections of recordings to the Otari MTR-90 MK. 2 multitrack tape machine, and thus assembling a master. In this way I could produce results that were quite spectacular compared to the standard practice of editing and splicing analog 1/4″ tapes.

The recordings in the HDU are triggered by MIDI notes, and you are supposed to record your audio, and then be able to start each recording by a MIDI note number from your sequencer. Problem was, that the machine is not precise enough for this purpose, and the edit points kept moving ever so slightly, resulting in bad edits, overlaps, phasing and other artifacts.

You can also edit audio directly on the machine, with a playlist functionality, which works more reliably, but can not be properly synced to your existing material.

The unit is pretty noisy and thus is best located a bit away from your workspace. The long remote cable makes it quite easy.

A “hidden” feature of the HDU is it’s use as a digital real-time effects processor. It is able to do time manipulation, distortion, delays and other digital effects. But because of the noise from the fan and the general high power consumption, these features are not very convenient in daily studio use.

With the lack of digital inputs and the lack of a working backup solution for your audio, the HDU has some serious flaws, but remains an interesting concept and an engineering breakthrough that paved the way for the DAWs we know today, The extraordinary price also made it a very seldom sight in studios.