The Jupiter-6 was born with MIDI, as one of the first synths from Roland. This is only available as a quite costly retrofit to the Jupiter-8.

On top of the Jupiter-8 – a natural expansion.

If you put a Jupiter-6 on top of a Jupiter-8 you’ve got a killer combo. I had this for several years, and I loved it. It was the basic synths on the DéFilm production, together with the Roland System-100M, Fairlight and Synclavier system. 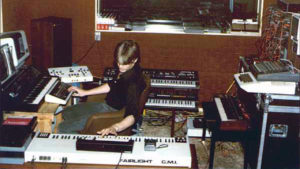 Most of the Jupiter-6 and Jupiter-8 parameters was gathered in the Roland MKS-80 MIDI Module, with 2 ekstra voices and ability to layer sounds and play them on different MIDI channels.