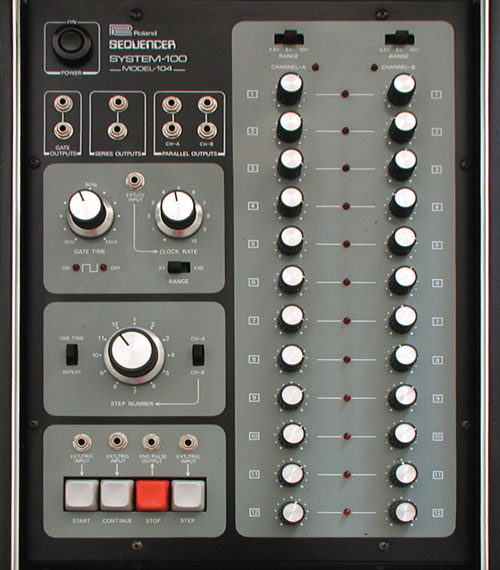 I started my sequencing career in 1976 using the Roland 104 Analog Sequencer, hooked up to the Moog Sonic Six – my first synthesizer.
The sequencer was originally part of the Roland System 100 Synthesizer system, but could be purchased individually, too. I hooked it up via a piece of copper wire to the Moog’s special trigger input and sequenced away happily. The 104 sequencer can be externally step triggered, so hooking it up to the trigger output on my Roland CR-78 Drum Machine produced my first synchronised performances between a sequencer and a drum machine, which I used for a lot of my first amateur recordings.

In what was probably the first ever Danish all-synthesizer band – Nous Yto – I even used the sequencer live on many occasions in the Copenhagen underground music scene. But with no Quantizing function available, the tuning was a challenge, and took a lot of time to get right before the start of each song.

The sequencer is special in that it has 12-steps rather than the usual 8 or 16 steps. This actually encourages more adventurous time signatures and happy accidents.

The generous amount of inputs and control options, makes the 104 quite versatile. The build quality is sturdy and weighty, in line with the rest of the System-100, and with same colours and feel as the Roland SH-3A and SH-5 synthesizers.